High heels, pumps, or jeweled stilettos, Andy Warhol loved to draw them all.

Many of them were blotted-line drawings, filled in with colour, and created when the artist was a commercial fashion illustrator in 1950s New York.

Landing his first job with Glamour magazine in 1950, Warhol’s big break stemmed from an early assignment to illustrate shoes for a feature appropriately entitled ‘Climbing the Ladder of Success'.  Impressed by his sketches, the magazine awarded him six additional pages, while the credit line mistakenly read ‘Drawings by Warhol’, a misprint that in turn lead the young Andy to drop the ‘a’ from his last name: Warhola.

A pivotal turning point in Warhol’s newfound career as an illustrator came in 1955 when I. Miller, a defunct shoe company established in New York in 1901, hired the young artist to create campaign advertisements for the Sunday edition of the New York Times. These full-page and half-page adverts, which ran for several years, were bold and colourful visual fantasies - often incorporating painting, drawing and collage - amongst a sea of otherwise tiny images and text.

Victor Hugo, Halston’s lover, sent down a big box of various styles of shoes to be photographed for the ad campaign for Garolini, one of Halston’s shoe licensees. The box was turned upside down and the shoes dumped out.  Warhol liked the way they looked spilled all over the floor; so he took a few Polaroids. The diamond dust idea was taken from Rupert Smith, who had been using the industrial grade ground-up stones on some prints of his own. Smith naïvely told Warhol where to buy the diamond dust and was surprised when it turned up as part of Warhol’s art: ‘Oh, it fell on my painting and stuck’.

This was a spectacular showcase for both I. Miller and Andy Warhol.  These advertisements eradicated the barrier between illustration and fine art, furthering Warhol’s career and reviving the I. Miller brand from a dowdy, dusty establishment into a stylish emporium seen at the pinnacle of art and fashion.

Andy Warhol created the ‘Diamond Dust Shoe’ series from 1980 out of these photos and they constitute a notable shift towards art merely utilizing fashion as subject matter.

‘Shoes’ is currently for sale at our Mayfair gallery. 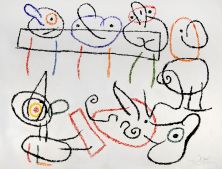