The Best of British: A Journey through British Pop Art in Five Artists

BY Costanza Sciascia ON August 13, 2021 IN The Gallery Blog

This week we take a journey through Pop Art in Britain, through the work of some of the leaders of the movement currently on show at Shapero Modern.

While perhaps less of a household name than Andy Warhol, Richard Hamilton was an important figure in the Pop Art movement in Britain.

Legend has it that a lollipop from one of his early collages gave the Pop Art movement its title.

In 1968 Hamilton was invited by Paul McCartney to design the sleeve and poster collage pull-out for the Beatles’ ninth album: The Beatles, more commonly known as the ‘White Album’ due to Hamilton’s plain white sleeve design.

The resulting poster, originally included with the album, is a printed collage of photographs of John, Paul, George and Ringo. For this design, Hamilton claimed to have been paid the equivalent of just £228!

His collages are infused with images from popular culture.   Reaching the pinnacle of his career during the 1960s and 1970s, he was knighted at Buckingham Palace for his services to art in 2002.

Alphabet is a series of 26 large, bold and colourful prints illustrating each letter of the alphabet through found images from postcards, magazines.

Blake has long fostered a fascination with alphabets, perhaps as an extension of his interest in nostalgic childhood ephemera and Victorian and Edwardian graphic illustration, and over the course of his esteemed career has used alphabetical formatting to underscore various series of collages.

At once whimsical, funny and intriguing, these works not only showcase the artist's impeccable eye for printed paraphernalia and appreciation for lettering, but are uniquely uplifting.

Patrick Caulfield was an English painter and printmaker known for bold images created in a strikingly graphic style.

Closely associated with the British Pop Art movement, Caulfield’s paintings focus on everyday objects and are characterised by their flat planes of colour and bold black outlines, creating an ambiguity between the real and the illusionary.

Studying at the Royal College of Art in the 1950s, he became friends with artists such as Peter Blake, who also celebrated the more quotidian facets of life. It was in this environment that Caulfield created his characteristic pared-down work.

Explore the available artworks by Caulfield.

Joe Tilson is one of the leading figures associated with the British Pop Art movement during the 1960s.

He was also a keen advocate for political activism, sexual liberation and social change.

Studying alongside the likes of Peter Blake and Patrick Caulfield during the 1950s at the Royal College of Art, his work has been held in collections globally since the 1960s, including the Tate, London; MoMA, New York; and Galleria Nazionale d’Arte Moderna, Rome.

New York Decals 3 and 4, a set of two screen-prints currently in our collection, are firmly rooted in the Pop Art movement due to their bold colours and semblance of consumer culture during the 1960s.

Making use of his previous experience as a carpenter, they also reflect Tilson’s lifelong interest in collage.

These works are particularly significant since they are some of Tilson's last Pop Art pieces.

During the 1970s he grew increasingly disillusioned with consumer society and attempted to transcend time in his work by focusing on pre-Classical mythology.

Humorous, wry and macabre are three words used to describe the drawings and prints depicting everyday life, by the highly prolific David Shrigley.

Shrigley taps into a particularly British sense of humour, including puns, double-entendres, sarcasm and pessimism.

'I'm actually trying to make things that are accessible and enjoyable to others' Shrigley has said.

Like a compulsive doodler with an infectiously sardonic sense of humour, the Glasgow-based artist makes deceptively simple-looking drawings and, to a lesser extent, prints and woodcuts.

Complete with childlike stick figures and crudely scrawled texts, they speak to the paranoid fantasies and everyday pathos of adulthood.

In 2013, he was nominated for the prestigious Turner Prize after his first major survey 'Brain Activity' at the Hayward Gallery, London and that same year he received the Trafalgar Square Fourth Plinth commission, a large public-art project realized in 2016.

Today, his works are in the collections of the Art Institute of Chicago, The Museum of Modern Art in New York, the Hammer Museum in Los Angeles, and the National Galleries of Scotland in Edinburgh, among others.
Available David Shrigley here. 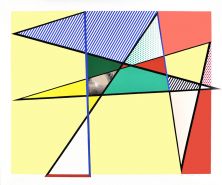 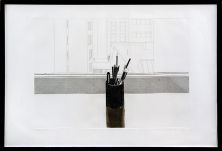 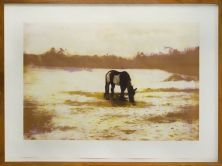 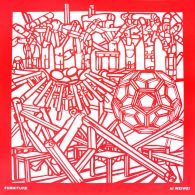