BY Costanza Sciascia ON April 13, 2021 IN Shapero Modern, Resources & Resources

every Wednesday on this blog

In ‘Vesuvius’ Andy Warhol represents the magnificence and grandeur of the Neapolitan icon in his typical Pop Art style. This is an ‘hommage’ to Naples and to its habitants.

For the first time in twenty years, Warhol returned to the technique of painting by hand for a screenprint with the aim of giving a personal and spontaneous angle to the image. He wanted to give the impression that the artwork was painted a minute after the eruption.

Inspired by the image of a postcard of Vesuvius, Andy Warhol distorts and manipulates the photo to obtain the final result. In this series, the artist created 18 versions with different shades, so that Vesuvius appears to be depicted in different phases of the eruption.

The omnipotence of death, on the other hand, is an aspect that the artist often exalted in his works. The dark lines in these serigraphs serve to emphasise the drama of the event and amplify the destructive nature of the lava mixed with the black smoke produced by it. All reminders of the images Warhol created in the early 1960s when he painted road accidents, disasters, suicides and electric chairs.

The parallelism of the city of Naples and the volcano is now obvious: the energy of a prosperous city on one hand and the danger of impending destruction due to the volcano on the other. Two characteristics that, according to Warhol, make Naples unique and special.

Warhol's first trip to Naples took place in 1975, when he was invited by the Neapolitan gallerist Lucio Amelio. They had met a year earlier in New York, when the artist portrayed Amelio in four serigraphs in different colours, one of these was traded for a painting by Cy Twombly. This was the start of a firm friendship and work collaboration.

For Warhol Naples was the Italian version of New York.  He found many aspects of the Big Apple in the Neapolitan city, especially the dirtiness of the streets and the presence of drag-queens declaring: ‘Naples like New York is a city that falls apart and despite everything, people are happy, like in New York’.  Warhol was fascinated by this place, which was so full of life, with the constant threat of destruction from Vesuvius looming over the city.

Naples reminded Andy Warhol of his city also due to the presence of ‘femminielli’, the Neapolitan version of the New York drag queens that the artist had used as the subject for the 1975 ‘Ladies and Gentleman’ series.  No other place has left Warhol with the emotions that Naples left him, and vice versa.  The artist has given so much to the city by relaunching it on the international cultural circuit.

Andy Warhol met Mick Jagger in 1963 when the Rolling Stones were relatively unknown in the United States. Warhol had designed the band’s provocative album cover ‘Sticky Fingers’, which caused a stir when it was released, however the attention gained for both the band and the artist was gratefully received.

Following the huge success of the album cover Warhol, ever keen to make money, lamented that he had not been paid enough given the millions of copies that sold. No doubt with an eye for financial success, Warhol turned to the subject of Mick Jagger, now a celebrity friend and part of the New York club scene.

In the summer of 1975, Jagger and his wife Bianca rented Warhol’s house on Long Island. There, Warhol took dozens of photographs of the singer from different angles, later narrowing the group down to the most successful.

Warhol particularly liked Jagger’s photogenic, ‘bad-boy’ image and was fascinated with the singer’s angular jawline which he accentuated with light and shadow. Jagger is depicted in this image bare-chested, looking straight into Warhol’s camera. He has incorporated blocks of irregularly shaped colour which, although printed, appear like collaged fragments of coloured paper.

In combining this with (printed) hand-drawn elements, the work appears more expressive than his earlier screenprints. The abstract quality of the blocks of colour shows the development of Warhol’s interest in more non-representational art that was emerging in the 1970s.

Andy Warhol’s ‘Myths’ (1981) is a portfolio of 10 prints that includes: The Star, The Witch, Howdy Doody, Uncle Sam, Superman, Mammy, Dracula, Santa Claus, The Shadow, and Mickey Mouse.
Several of these screenprints in colours are also embellished with diamond dust (The Star).

The subjects of the screen prints are famous figures from American films, history and culture. Almost all the prints were derived from existing images while he used costumed models to create the portraits of Santa Claus, Uncle Sam, and Mammy. Overall, the portfolio encompasses Warhol’s own life and the magic of 20th-century American pop culture.

The imagery presented in ‘Myths’ are nostalgic representations of America’s enchanted past. From the vibrant colouring to the icons’ dramatic expressions, each screenprint reflects American glamour and theatricality.  These images are all taken from the 1940’s and 1950’s, when Warhol was a young boy, and experts see this portfolio as a vision of the artist’s childhood.

Whilst ‘The Star’ came from an existing image, a still of Greta Garbo in costume for her lead role in the 1931 film ‘Mata Hari’ directed by George Fitzmaurice, this image seems to break from the others in the series, since the character being portrayed – a wartime exotic dancer and spy – does not appear to be the work's subject, but rather Garbo herself - perhaps the greatest living movie star from the black-and-white era.

Warhol was a great cinephile, and had drawn illustrations of Garbo in the mid-1950s, before his gallery career took off, and is even said to have modelled his public persona on the reclusive film star, who retired from movie making in 1941.  According to some reports Warhol met Garbo in 1950s at a picnic in New York. He is said to have given her a paper butterfly, which she later absent-mindedly crumpled up.

In the end, Warhol imposes his pop style onto these already established icons, injecting himself into the vein of pop culture. Even more remarkable, these images continue to be recognisable in contemporary times, wittily subverting what Warhol termed 'fifteen minutes of fame’.
Find out more about The Star.

Electric Chair is part of Warhol’s substantial Death and Disaster series which he started in 1962, early examples of which depicted car crashes and suicides as illustrated in newspaper images. With this series Warhol began to explore the effect of reproducing such images repeatedly across a canvas, testing his hypothesis that, as he suggested in 1963, ‘when you see a gruesome picture over and over again, it doesn’t really have an effect’.

Warhol began using the image of the electric chair in 1963, the same year as the two final executions in New York State. Over the next decade, he repeatedly returned to the subject, reflecting the political controversy surrounding the death penalty in America in the 1960s. The chair, and its brutal reduction of life to nothingness, is given a typically deadpan presentation by Warhol.

The image of an unoccupied electric chair in an empty execution chamber becomes a poignant metaphor for death. In subsequent iterations of the electric chair image, Warhol experimented with colour and composition. In 1971 he produced a series of ten electric chair screenprints on paper. Here, the images are more tightly focused on the chair itself, such that it occupies a larger proportion of the pictorial space, and each has been printed in a bold colour such as yellow, pink, blue and orange.

Find out more about The Electric Chair available at Shapero Modern by Andy Warhol.

Andy Warhol’s Turtle, 1985 is a metamorphic portrait of a sea turtle in shades of purples, pinks, and blues. Based on a photograph the unusual colour palette is striking and surreal, interrupting the viewer’s ability to recognize the subject.  Whilst the saturated hues amplify the image, Warhol’s pop art style iconizes the turtle with intensity through his use of graphic outlines and commercial aesthetic.

While this artwork was not part of a series, it was created two years following Warhol’s famous and acclaimed Endangered Species Portfolio, addressing the artist’s concern for the preservation of wildlife. While it is likely that Warhol’s care for ecological issues informed his creation, Andy Warhol Turtle, 1985’s conception was promotional.  The artwork was published to coincide with the 1985 film Turtle Diary written by Harold Pinter, a romantic comedy centred on the sea turtles at London zoo, and the individuals who wish to free them from captivity. Directed by John Irvin and based on the novel by Russell Hoban, the film featured stars such as Ben Kingsley and Glenda Jackson. 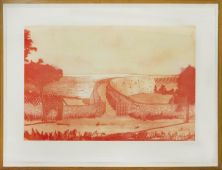 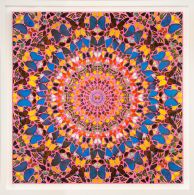