'What is a Print?' by Gallery Director Tabitha Philpott-Kent

Artists have long supplemented their larger practice by making prints: original works, usually on paper, created in numbered editions and produced in collaboration with some kind of press.

There are many different types of prints, and the process is constantly evolving, but below our Gallery Director Tabitha explores the four most common techniques you will hear about:

Using an etching needle, an artist scratches an image onto a metal plate covered with wax. This plate is then submerged in acid, which eats into the metal exposed by the scratched lines. The longer the plate is left in the acid, the deeper and darker the line will be. The plate is cleaned, inked, and cleaned again, leaving only the incised lines filled with ink. Dampened paper and a protective cloth are placed over the plate, which is squeezed through an etching press — the pressure forcing the paper into the etched lines to pick up the ink. The image is printed in reverse, and an indentation, known as the ‘plate mark’, is left by the plate’s edges.

The artist draws onto stone or a plate (often metal, but other materials can be used) using a grease-based medium — normally special lithographic crayons, or greasy ink known as tusche. The plate is then treated with a chemical solution that ensures the image will attract printing ink, and that blank areas repel ink and attract water. A solvent fixes the image, and the surface is dampened with water. Oil-based ink is then applied to the stone with a roller, adhering only to the image. Finally, the plate is placed on a lithographic press and covered with damp paper and board — a pressure bar ensuring force is evenly applied across the image. The image is printed in reverse, with separate plates used for complex images and multiple colours. This technique allows the artists to freehand draw which makes the final work much more painterly.

An image is cut into a sheet of paper or plastic film, creating a stencil. This stencil is then placed in a frame, which has a layer of fine mesh stretched across it, forming a ‘screen’ (initially silk was used, hence one will often see the term Silkscreen). A sheet of paper is placed below the screen, and ink is pushed through the stencil from above, using a rubber blade or squeegee. Only cut-out portions of the stencil print. In addition to stencils, a photographic image can be reproduced on the screen using light-sensitive gelatins. This technique has the effect of layered paint.

An image is sketched on a block of wood before the surface is carved into with gouging tools. The resulting raised portions of the block are then coated in ink using a roller. A sheet of paper is placed on top and pressure is applied, leaving an impression of the block’s raised areas in reverse. Woodcut is the oldest printmaking process

Original prints are distinct works independent from any other body of the artist’s work, an image that is made and then transferred to paper via ink as many times as the edition requires. Fine art prints result from a close collaboration between the artist and the print studio. Printers — the people who work with the artist to produce an edition — are highly skilled technicians, and are often artists in their own right, they are typically referred to as Master Printers.

As a result they are true works of art, and as important to the artist’s oeuvre as drawings or other works on paper.

An original print is a unique artwork, it is generally produced as a limited number of impressions, known as an edition, and each print is given an edition number, typically written as a fraction — for example, 24/50. The number to the right of the slash indicates the edition size while the figure to the left is the individual print’s number. Numbering the print is often done by the print studio.

An artist may also produce a limited number of artist’s proofs, often marked A/P, that are identical in nature to the standard edition. Here again, fractions may be used to indicate the total number of proofs, and the print number (e.g. A/P 1/4). Other proofs may be made at an earlier stage, as the artist and printer develop an image or test different compositions. These are known as state proofs, trial proofs or colour proofs. These can be unique, with differences in colour combinations, paper types or size.

There are often proofs reserved as a gift for the printer, these are known as Printer’s Proofs and will often have PP written on them.

When the image is perfected, a proof is made and signed B.A.T. (an abbreviation of the French bon à tirer, or ‘ready to print’). The rest of the edition is matched to this image, which is unique and traditionally kept by the printer.

Hors commerce is French for 'before trade.' You may see this on a print as H.C. These proofs are typically reserved for the publisher, but are often released into the market as well.

Are all prints signed? What does it mean if I find a print without an artist’s signature?

The majority of the prints sold are signed — though not all prints are issued with a signature. Warhol and Picasso both stamp-signed some of their prints, and some larger portfolio editions were only signed on the title page. Don’t be alarmed if a print is only initialed. It doesn’t mean that it is worth less — indeed, some artists only initial their prints.

How should I care for my print?

How you frame your print is the most important long-term decision you make when it comes to caring for and keeping the piece. Make sure you go to a reputable framer: it’s worth paying for a print to be properly mounted using the right materials and use UV perspex or glass.

Three key tips: if a print has bright colours, don’t hang it in direct sunlight; ensure a print is kept away from any source of moisture; don’t trim the sheet to try to fit it into a smaller frame. 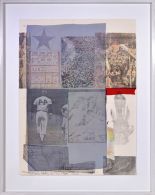